BHS Lions rack up wins over Norwood, Chadwick and Lutie 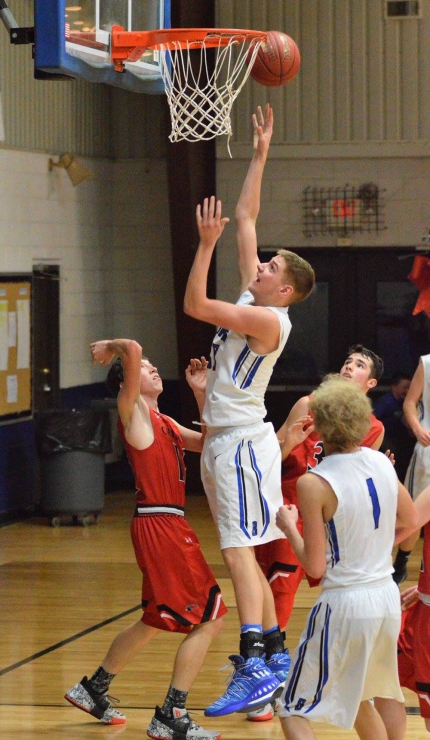 Bakersfield senior Nathan Scott goes up for 2 points against Chadwick. The Lions have had a successful series of games, with recent wins over Norwood, Chadwick and Lutie. Scott led the team, scoring 27 points against Norwood and 18 against Chadwick. The Lions continue in the Bradleyville tournament with a 4 p.m. game Thursday and a 7 p.m. game Friday. Photo by Amy Ingalsbe.

The Bakersfield Lions defeated Norwood and Chadwick last week and had a first-round victory over the Lutie Indians in the Bradleyville tournament.

On Tuesday, Dec. 12, Bakersfield’s varsity and JV teams traveled to Norwood, where the JV boys won their game 45-34. Levi Tryon and Tristan Morris both led the team with 13 points each, followed by Brady Ingalsbe with 9 and Briggs Hardin with 7.

The varsity Lions came away with a 62-50 win. Nathan Scott led the team with 27 points and 11 rebounds. Reece Anstine had 11 points, Jordan Kuk and Cole Summers both finished with 8 points.

Bakersfield hosted the Chadwick Cardinals Friday, Dec. 15, and the varsity had their best game of the season so far, according to coach Brandon Cotter, beating Chadwick 63-52. Nathan Scott led the scoring with 18 points, followed by Cole Summers with 15. Hunter Bentley and Derik Murphy had 10 each. “We played our best all-around game” said head coach Brandon Cotter. “We did a good job of handling their pressure and rebounded really well.”

The JV boys played a half game and fell to Chadwick 18-16. Nathan Talley led the way with 6 points, followed by Levi Tryon with 4.

The Lions are competing in the Bradleyville round robin tournament this week; they defeated the Lutie Indians 61-51 in the first game Monday, Dec. 18.

Doug Tefft led the way with 13 points, followed by Reece Anstine with 10.Brevin Bales and Hunter Bentley finished with 8 each.

The Lions will continue in the Bradleyville Tourna-ment when they take on Wright County at 4:30 p.m. Thursday, and Bradleyville at 7 p.m. Friday.