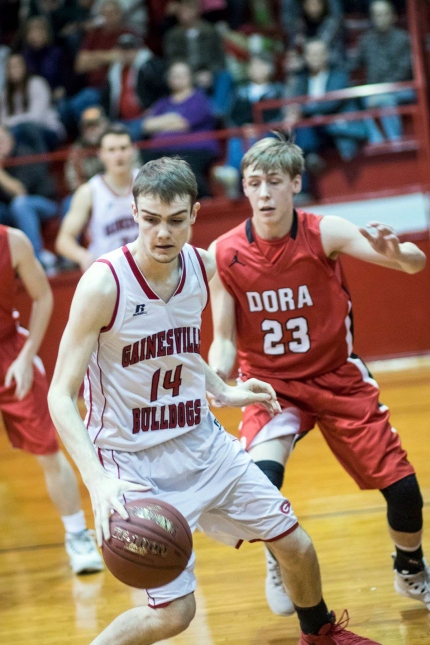 GHS senior Wyatt Wilson drives past Dora’s Mason Luna during Friday night’s game in the Gainesville High School gym. The bleachers were packed to watch the battle between the intra-county rivals. Photo by Karla Smith.

Friday night, Jan. 12, the bleachers were packed full of red when the Gainesville Bulldogs hosted the Falcons.

Despite a hard fight by the Bulldogs, the Falcons took home a 70-56 victory.

“I was really proud of the way we competed,” said Gainesville coach Matt Powell  “Our effort was there all night. I thought we struggled defensively, but I give them credit; they are hard to guard. We are excited about the way we’re playing right now and are looking forward to next week’s games vs. Lutie, MCE and the Sparta tournament to follow.”

Dora’s freshmen led the scoring for the Falcons with 23 points from Isaac Haney, 19 from Bryson Luna and 13 from Mason Luna. Other players scoring for Dora were Brent McKemie with 6, Auston Luna with 4, Robert Vigdal with 3 and Kaleb Harris with 2.

Gainesville’s Garrett Morgan and Brandon Poe led the scoring for the Bulldogs with 13 each. Brodie Chapman and Jaxon Britt added 8 each, followed by Wyatt Wilson and John Hossman with 5 each and Justin Wallace with 4.

The Bulldogs play the Lutie Indians at Lutie, with games beginning at 5:30 p.m.. and will compete in the Sparta Tournament beginning Monday, Jan. 22.

Dora’s next game is at 5:30 p.m.at Ozark High School  when they take on Aurora for the Scoreboard Guy Shootout.