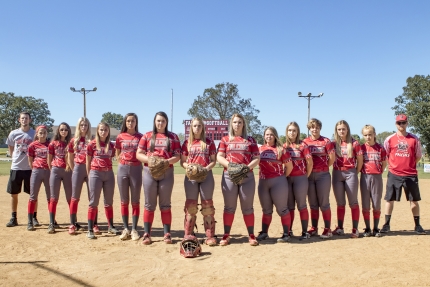 The Dora Lady Falcons made it to the championship game of the Class 1 District 1 tournament held at Norwood last week. The Lady Falcons took on Naylor in the first round, and  Keeli Land started the game off right with a lead-off homerun in the first inning. The score stayed 1-0 until Naylor scored two runs in the sixth inning.

The Lady Falcons responded with four runs of their own in the sixth inning, beginning with a leadoff single by Riley Collins, followed with hits by Mary Fehr, Haley Thompson, and Sarah Fehr.

“The girls played well,” coach Dylan Fox said. “Keeli was good in the circle. She only struck out one, but she forced a lot of weak ground balls and pop-ups that our defense handled well. Our hitting was kind of slow throughout the game, but we got some key hits when we needed to.”

“We never could get our bats going at all against Norwood,” Fox said. “Give credit to Norwood, they played well, and their pitcher looked good. But the not hitting got us once again.”

The game was scoreless through three innings. “Keeli was pitching really well, until we gave up a leadoff triple and got down 1-0,” Fox said.

Norwood added another run in the fourth inning. Keeli ended up with seven strikeouts on the day. “She really pitched well and kept us in the game,” the coach said. “We just couldn’t scratch any runs across.