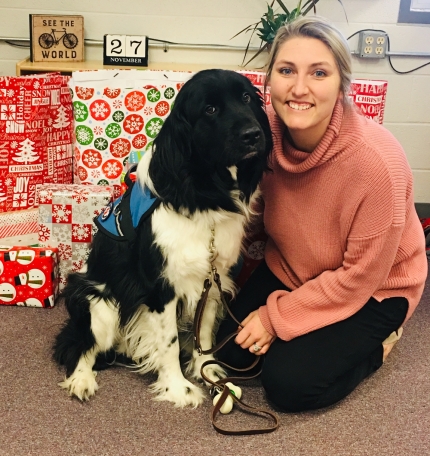 Dora K-12 school counselor Amelia Menz became interested in acquiring a Certified Assistance Dog while attending the Missouri School Counselor Association’s annual conference in 2014. She set about applying for a program operated by CARES, Inc., in which inmates in correctional facilities help with basic training. Twenty-seven months after she applied for a dog, Menz was paired with Holly and spent a week training with her in Kansas. Now, she says, Holly has a had “tremendous” success working with students at Dora.

When Dora K-12 school counselor Amelia Menz was working in another district back in 2014, she attended the Missouri School Counselor Association’s annual conference, where break-out sessions offered information about animal-assisted therapy. Those sessions “got the wheels turning,” she said recently in an email message to the Times.

“After diving into some research about animals and how they scientifically and psychologically impact mood and behavior, I decided I wanted to find a way to bring the amazing benefits of it into working with children,” she said.

Menz did find a way, and now, four years later, the result is Holly, the Certified Assistance Dog who accompanies her to Dora School a few days a week. In a brochure about Holly, Menz says, “Holly loves working with ‘her kids.’ When it’s time to put on her working vest in the morning, her tail just keeps wagging! She also goes to many public places such as restaurants and stores to practice good behaviors.”

Here’s the story of how Holly has joined Menz in assisting the students at Dora School.

During the year after that conference in 2014, Menz explored many options for acquiring a Certified Assistance Dog. Would she raise and train her own animal, or would she purchase from an organization an animal that had already been trained? After interactions with other Missouri school counselors who had already implemented assistance dogs into their districts, Menz applied to the CARES, Inc. (Canine Assistance Rehabilitation Education and Services). She paid the application fee herself and completed an interview with the organization. Then the waiting began. After 27 months she got the call that a dog had been trained especially for the students in her counseling program based on that interview, and that she would spend a week in Concordia, Kansas, for intensive training with that dog to become a Certified Assistance Team. (For more about the organization, visit caresks.com.)

While Menz had been waiting, Holly had been busy. She “first took a temperament test to prove that she was both gentle and smart,” Menz wrote in the brochure about Holly. “She passed with flying colors, of course!”

Next, she was trained in obedience and basic socialization by an inmate in a special program within the Springfield Correctional  Facility. Holly then went to CARES, Inc., for advanced and task training.

Holly is a Landseer Newfoundland, or “Newfie,” a breed known as “gentle giants due to their love of children,” Menz said in the brochure.

Holly is Menz’s dog, bought and paid for, and Menz has also paid all expenses of acquiring, training and owning a Certified Assistance Dog. “This includes food, medical and dental care, grooming, continued training, insurance and anything else that may come up,” she said. Menz also paid for her weeklong stay in Kansas and has used her own paid-time-off days to train with Holly as the week in Kansas occurred a during a time when school was in session. “There has been zero cost to the school district,” Menz said in her email. “I felt so strongly about bringing her to our students that doing all of this is a no brainer to me!”

When she’s not working, Holly lives at home with Menz and her husband, Chad, and their other dog Rami, a long-haired Chihuahua who’s “just a family pet,” Menz said, adding that when Holly has her vest on, “she knows it’s time to be on her best behavior and work, but at home, when that vest comes off, she transforms into a playful pup who loves to romp around with her puppy brother.”

Hanging out at home with Chad Menz as he works cattle helps Holly recharge her batteries “after those big days working with her kids at school,” she said.

Menz says the benefits of how Holly works with the students are “tremendous. I could talk for days about the impact she’s had on our students since starting. Holly is a natural icebreaker. Most kids see a dog and are instantly drawn to her, wanting to pet her fur, shake her paw, scratch her belly, get down on the floor to play (and Holly will happily oblige),” Menz said. “She has an amazing way of helping students ‘get out of their head’ and she makes it easier for them to speak freely because they know Holly is a safe friend to unload big feelings to. Sometimes it’s like they forget I’m even in the room!”

Holly has also been helping in “deescalating situations where a child may be overwhelmed and need a break from the classroom,” she said. “They learn to regulate safer behaviors on their own with Holly around because they don’t want her to get hurt. She helps students understand setting and respecting boundaries, fine-tuning their listening skills. Her presence seems to increase self-awareness of feelings and promotes empathy.”

Holly also has been “a wonderful tool for motivating students to engage socially who otherwise don’t seem to connect with their peers,” Menz said. “I’ve seen an increase in enthusiasm from students who haven’t particularly liked coming to school now look forward to the days Holly is on campus because they feel a special connection to her. She lessens the tension between students having a disagreement, and she sat alongside our high school students during a recent ACT test, curling up at their feet for reassurance and watching the room for someone who might need the nudge of a wet nose.”

Holly also visits elementary classrooms to help struggling readers practice their newly acquired skill. “That nonjudgmental listening goes a long way,” Menz said. Last summer she and Holly volunteered at the West Plains Public Library and helped create a summer reading program for area students to practice their reading skills. “It was a big success, and we plan to continue with that in 2019,” she said.

Having a Certified Assistance Dog is still a relatively new thing for Menz and the Dora students. “We’re working up to Holly visiting school more and more frequently,” she said. “It’s an adjustment for her as a working animal and for the school as we navigate what works well and where she is most effective for our students. I coordinate the days she visits with our superintendent, either because there are certain students I need to see who do well with her around or when there’s a community event, like this fall’s Halloween costume parade.”

It also lists “Holly rules” for how students can safely interact with her: First, students must ask to pet Holly and get Menz’s OK. The rules tell students, “Think to yourself: ‘Is this a good time to come say hello to Holly?’ Leaving your classroom or jumping out of line in the hallway are not responsible times to come visit or pet.”

Students are taught to approach Holly slowly and calmly, holding out a hand for a sniff before petting her. When passing her in the hallway, they’re encouraged to give her a silent wave, and when permission is given they’re encouraged to “swipe and go,” giving her a quick pet and moving on.

Menz and Holly attend many different district  events, like the Halloween costume parade, parent-teacher conferences and the Christmas program. “We try really hard to have Holly be as visible as possible so she can interact not only with students but also the community.”