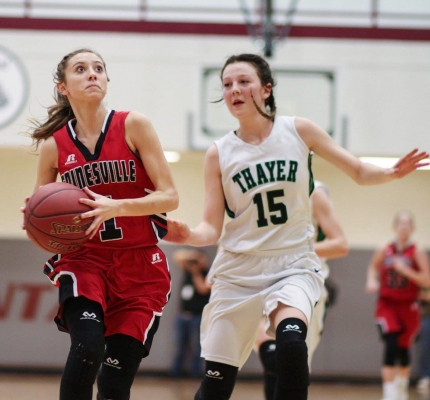 Gainesville senior Aspyn Britt looks to shoot during the battle against the Thayer Lady Bobcats for the Mountain Grove tournament championship Friday night. Britt was named to the all-tournament team. The Lady Bulldogs, seeded in the number 6 spot for the tournament, brought home the second place trophy. Photo by Karla Smith.

The Gainesville Lady Bulldogs held their own at the Mountain Grove tournament last week, bringing home the second place trophy after wins over Cuba, Mansfield and Mountain View/Liberty before falling to a tough Thayer team in the championship game. This marks the fourth consecutive year that the team, which was seeded sixththis year, has made it to the championship contest. “The tournament was a very good effort by our team.  Being the 6 seed and making the championship game was a good accomplishment,” said Gainesville coach Morris Jenkins.

Tuesday, Dec. 26, the Lady Bulldogs beat number 11 seed Cuba in the first round, 55-35, led by Elizabeth Kinworthy’s 16 points. Senior Aspyn Britt added 14 points and led in assists with 6 and steals with 5. Britt and Natalie Kiger each pulled down 5 rebounds to lead that column. Cassie Carlo scored 10, followed by Shelby Smith with 8,  Erin McKinzie with 5 and Shayla Wages with 2.

The Lady Bulldogs returned to Mountain Grove Wednesday to take on number 3 seed Mansfield. The game was tied up at 12 after the first-quarter buzzer. The Gainesville girls were unable to make any headway in the second quarter, with Mansfield outscoring Gainesville by 2, ending the first half with the Lady Bulldogs trailing 23-21.

Gainesville came back strong from the locker room, scoring 16 and holding the Lady Lions to just 4 points in the third. Fans didn’t get a chance to relax during the nail biter of a game as Gainesville toughed out a 48-40 victory over the Lady Lions. Aspyn Britt led the scoring with 16 points, followed by Cassie Carlo with 14. Other players scoring were Brexton Miller 5, Shelby Smith and Elizabeth Kinworthy with 4 each, Shayla Wages 3 and Natalie Kiger 2. Carlo led in rebounds with 5, followed by Britt with 4. who led in assists with 5, followed by Smith with 3. Smith led in steals with 3.

On Thursday, Gainesville took on number 7 seed Liberty and won 50-39, led by Elizabeth Kinworthy with 18 points. Other players scoring were Aspyn Britt 12, Shelby Smith 11, Cassie Carlo 4, Brexton miller 3 and Erin McKinzie with 2. Smith led in rebounds 7, followed by Kinworthy with 6. Britt led the assists column with 8 and steals with 3.

The win over Liberty pushed the Lady Bulldogs into the tournament championship game against the Thayer Lady Bobcats Friday, Dec. 29. Gainesville outscored the Lady Bobcats 12-8 in the first quarter, but Thayer made some defense adjustments in the second period and held Gainesville shooters in check to end the half with the Lady Bulldogs behind, 24-13. A final score of 48-28 earned Thayer the first-place trophy, but Coach Morris said he’s proud of his team. “The  wins over Cuba, Mansfield and Liberty were quality wins, and the loss vs. Thayer came against a very good team,” he said. “This group is really playing as a team and has had stretches of playing good basketball.  As we move into conference play and look down the road to districts we will strive to become more consistent on offense and to develop a more aggressive rebounding mentality.”

Senior Aspyn Britt was named to the all-tournament team.

The Lady Bulldogs, now 8-3 on the season, are competing in the Sparta Lady Trojans Tournament this week, where they are seeded second behind Blue Eye. Other teams participating in the tournament and their seeds are Bradleyville 3, Conway 4, Norwood 5, Verona 6, SW Rush 7 and Sparta 8.