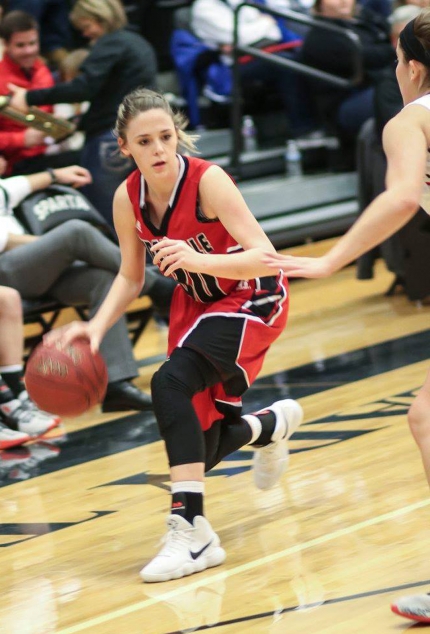 Gainesville junior guard Cassie Carlo takes the ball down the court in Saturday’s championship battle against Blue Eye at the Sparta Tournament. Photo by Karla Smith.

Saturday’s  fight for the championship trophy at the Sparta Tournament finished a stretch of seven games in 12 days for Gainesville’s Lady Bulldogs basketball team. The team went 5-2 over the course of those days, with one loss to a tough Thayer team at the Mountain Grove Tournament, followed by  Saturday’s 46-29 loss to Blue Eye for the Sparta championship.

“I felt our team did a good job of adjusting to the different opponents and strategies each team presented and represented our school well,” said GHS coach Morris Jenkins.   “Specifically in the Sparta Tourna-ment, we showed good poise and determination throughout and came away with a second place finish.”

The Lady Bulldogs defeated SW Missouri Rush 45-24 on Thursday, Jan. 4, in the first round of the tournament. Aspyn Britt led the scoring with 13 points, followed by Cassie Carlo with 12 and Shelby Smith with 11. Elizabeth Kinworthy added 7 and Erin McKinzie chipped in 2 points. Elizabeth, Cassie and Shelby led the rebounding column, pulling down 9 each. Shelby led in assists with 3 and Cassie led in steals with 3.

Friday night, the Lady Bulldogs took on Bradleyville and won 43-35. Aspyn led the scoring with 11, followed by Cassie with 9. Other players scoring were Shelby 6, Shayla Wages 6, Erin 5, Elizabeth 4 and Brexton Miller with 2. Cassie led in rebounds with 9. Aspyn led in assists with 9 and steals with 5.

The victory put the Lady Bulldogs in place to battle Blue Eye for the championship, but the team wasn’t able to overcome a halftime deficit and lost 46-29. Senior Shelby Smith led the scoring with 11, followed by Elizabeth with 10. Elizabeth led in rebounds with 6. Natalie Kiger led in assists with 2, and Aspyn led in steals with 1.

“We faced deficits in  the games against the Rush and Bradleyville but stayed poised and played well enough defensively to give our offense time to put together enough good stretches to get two quality wins,” Jenkins said. “In the Blue Eye game, we faced a team that was very athletic and played an attacking style.  We dug ourselves a first half deficit we couldn’t overcome but did keep battling and were able to play them even the second half.  Overall, I feel we rebounded a little more aggressively and definitely showed a willingness to compete at a high level.  We’re still needing to find more consistency offensively but I feel we are approaching it with the right team attitude which will give us the best chance to improve in this area.”

The Lady Bulldogs travel to Dora to play the Lady Falcons at 6 p.m. Thursday, Jan. 11, and they travel to Mountain Grove Jan. 15 to take on the Lady Panthers.