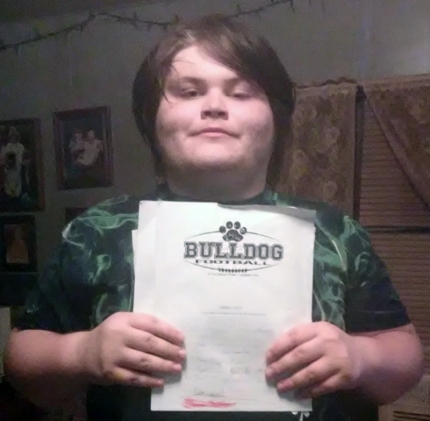 Dalton said he got the idea while talking to the school’s IT instructor Butch Hoornstra, a 1989 GHS graduate, who told him about his time playing football at Gainesville. Dalton thinks restoring football here would be a good idea for several reasons. One of them is that it could “help the school grow,” he said, “because sometimes students who can choose which school to go to will choose a school with a sport they like.”

He posted the petition on his Facebook page and received encouraging responses, including supportive comments from David Murphy, who coaches third- through sixth-graders in the Ozark Football Association. “One woman even said her husband would take care of the field,” Dalton said.

After spending several hours Saturday at Town & Country Supermarket, Dalton had collected 168 signatures by Monday night. He also collected 32 signatures of students “who said they would sign up to play football,” he said.

Dalton plans to ask superintendent Jeffrey Hyatt to help him get on the agenda at an upcoming school board meeting so he can present his petition. “If they say yes, then great. If they say no, I’ll keep working,” he said.