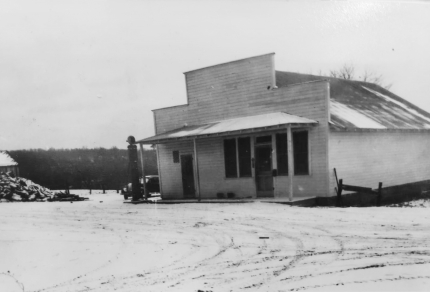 This photo of the Thornfield store gathered several interesting comments when Ozark County Western Commissioner Greg Donley posted it recently on his Facebook page. The photo, taken in the late 1940s by grocery sales rep Orval Jernigan, shows the store that once stood on Thornfield’s “Main Street” when it was owned by the late Elmer Delp, grandfather of current Ozark County resident Eddie Delp. Elmer operated the store from the 1930s until his death in 1956, when his sons Sonny, Dorman and J.D. Delp took over the store’s operation. In 1960, they sold the Thornfield store and opened a grocery and feed store on North Main Street in Gainesville (in the building that currently houses Shenanigans arcade). The Thornfield store was purchased by Chet Watson, who moved the building to Highway 95, where it still stands today. It was later operated by Hervile Gaulding until he opened the business across the road that’s now the Heriford Store. The building also housed a restaurant and, more recently, a tire shop.

TIMES PAST MAGAZINE IS HERE! pick up your free copy. Times Past Magazine, filled with eye-catching historical photos of Ozark County along with intriguing and heartwarming tidbits of history gleaned from more than 130 years of Ozark County Times archives, is now available free wherever the newspaper is sold. To have the magazine mailed to you, send a check for $5 to cover shipping and handling to Ozark County Times, P.O. Box 188, Gainesville, MO 65655, or call the office at 417-679-4641 and provide mailing and credit card information.

Ozark County Times
July 26, 1918
Dr. G. W. Taylor of Almartha was here Monday, Tuesday and Wednesday performing his duties as examining physician on the local board. Drs. Kyle of Hammond and Green of Bakersfield were here the same days serving as an advisory board.
Drs. J. H. Green of Bakersfield, E. H. Kyle of Hammond, G. W. Taylor of Almartha and J. H. Small of this city were dinner guests at the home of Dr. J. T. White on Tuesday.
Sand Ridge – Our school is progressing nicely. We have 35 pupils.
Don’t forget the Red Cross meeting here every 4th Saturday night.

July 21, 1938
News reached here Sunday from Bakersfield that Uncle Joe Gillett of that place had killed himself early that morning. He had taken his shotgun and gone out to kill a hawk. A short time later he was found fatally wounded in the side by a charge from his gun which is believed to have accidentally charged.
John Hogard lost three of his five milk cows Saturday when the five cows entered through an open gate into a field of Johnson grass belonging to Newt Martin. The cows were in the field only a short time when discovered, but three of them had eaten enough of the grass and were dead.
Rockbridge – Jason Brown returned home from Thornfield having failed to pass the physical examination for the CCC.
Romance – A large crowd attended the ballgame at the Arp field Sunday. The West Plains colored boys won the game from Capt. Tabor’s team, the score being 3 to 7.

July 29, 1943
Miss Velta Miller became the bride of Mr. Chad Hambelton on July 17.
... The young couple gave their friends a surprise by crossing the line and being married quietly at Mountain Home, Arkansas.
Longrun – Mrs. Roy Sowards and Mrs. Stanley Sowards left here last Monday to visit Stanley who is in a hospital in Mississippi following an airplane crash. At last report he was getting along fine.

July 29, 1948
Mrs. Lela Bennett, 50, wife of the Rev. A. D. Bennett, who lives about 3 miles from Dora, was critically burned last Saturday at her home when an oil stove exploded. She is still in a serious condition in a Springfield hospital.
According to Mrs. Bennett’s son, his mother lit the oil cook stove preparing to fix the evening meal. The stove flared, and when Mrs. Bennett reached for a jug of gasoline to get it out of the way, the fumes exploded, severely burning the lower part of her body. She was immediately taken to Springfield in an ambulance from Mountain Grove.

July 24, 1958
Ad – Free Movie. Here’s all you do. Just ask your mother to buy a carton of lighter, brighter Royal Crown Cola at regular price. ... then take six RC bottle caps to the Ozark Theatre for Free Admission to RC Saturday Aug. 9 at 2 p.m.

July 28, 1960
Doyle Fred Owens, the son of Donnie and Fred Owens and the grandson of Mr. and Mrs. Charles Owens and Mrs. Ben Breeding, will graduate Saturday from the Missouri School of Mines at Rolla with a B.S. in Civil Engineering. He will also be commissioned a lieutenant in the U. S. Army reserve.
Doyle Owens grew up on a farm 3 miles west of Gainesville and is a 1956 graduate of Gainesville high school. He was married to Miss Sue Willbanks of Kansas City, the daughter of Mr. and Mrs. Ted Willbanks, last November.

July 25, 1968
Eleven of the 15 members of the 1943 graduating class of the former Thornfield high school held their first class reunion Sunday a week ago at the elementary school there.
Benton Breeding was employed as superintendent of the Gainesville R-V schools and Mrs. Ida Mae Huse as principal of the Gainesville elementary school at the R-V Board of Education at their meeting last Thursday night.
Mr. Breeding, who has been Gainesville elementary principal since 1950, replaces M. J. Luna, who died May 25. ... Mrs. Huse taught 7th grade last year and has taught 8th grade several years.

July 21, 1993
Shelly Uchtman, 1992 Hootin an Hollarin Queen, will be featured on Springfield television station KY-3’s Action News at noon today. ...
Shelly is the daughter of Wilburn and Edna Uchtman of Gainesville.