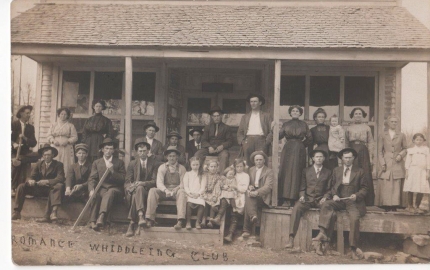 The “Whiddleing Club” in this undated photo from Romance, shared a few years ago by Russ Robinson before his death, isn’t the club whose members complained in the 1932 item below about the “whittling material” two of the members supplied, but it might have been a group that whittled about the same time.

Noah Hawkins, an old citizen of this county who went to the Indian Territory about two months ago to locate, is among us again and occupies the residence east of the school building.

Noah, like many of us, has drunk of the waters of Lick Creek too often to attempt to locate elsewhere with any degree of satisfaction.

Caney – John Wadkins is here visiting Wesley Tysons. He probably will stay all winter. He has been working in the mines at Joplin for the past 10 or 12 years, and he now has miner’s consumption.

Rabbits are 12 cents each. Eggs 37 cents per dozen.

Claud Grisham, probably the smallest man in Missouri, was baptized into the Church of Christ Sunday. Claude is 25 years old and weighs 62 pounds.

Hammond – Mr. and Mrs. Jellac, John Hash, Bernice, Helen and Walter Miller were at Mr. Ramsey’s Wednesday evening. The evening was spent eating popcorn and listening to the radio.

Richard Barner and Fred Johnson were to furnish whittling material for the club last week, and they brought some well-seasoned black gum and were severely chastised for it. Boys, that won’t do. The order is for pine only.

Longrun – Mildred and Helen Willhoit, who are teaching near Ava, spent the weekend at home.

Thornfield – Sgt. Ealum Bruffett, who is a graduate of Army gunnery school which entitles him to the Silver Wings pin he is wearing, after spending a few days with his wife, infant daughter and his parents, will return soon to Harlingen, Texas, where he is stationed.

Willhoit – Mr. and Mrs. Elmer High announce the arrival of an 11 lb. boy. He has been named Lonnie Dean.

Scoring for the Bulldogs saw David Morrison with his best game of the year hitting 10 field goals and 5 of 6 free throws for 25 points; Warren Snelling with bursts of speed broke away for several layups and 12 points; Hervil Warrick chipped in 9 points; Bob Robbins and Gerald Walker hit 4 each; Gary Frazier and Joe Hawkins hit 2 each while Jim Reed, Harold Thomas and Lester White also saw action.

A delegation from Ozark County reinforced by Douglas County supporters will appear before the State Hwy. Commission on Dec. 17 to present a plea for the early construction of Hwy. No. 5 between Gainesville and Wasola.

The lot, where once the Alta Boone home stood, has been leveled and cleared for the purpose, and will be in use soon.

Isabella – A large crowd attended the funeral for Edgar Haskins. He was laid to rest in the Isabella Cemetery.

Ninety-one Thornfield School students participated in a reading improvement program recently and completed reading a total of 118,180 pages or an average of about 1,298 pages per student.

The Thornfield program ran from Nov. 9 to 22 and coincided with the National Reading Week and Missouri Reading Week which was Nov. 16 – 22.

Longrun – Some 20 relatives and friends were at Opal Jones for early Thanksgiving dinner and baby showers for Mr. and Mrs. Randall Jones. Mr. and Mrs. Smith from Dora were there. Landon, Elizabeth and baby Stephen Jones visited later.