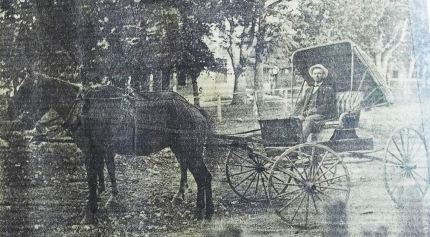 This photo of Dr. W. T. “Willy” Wiles is from an unidentified and undated newspaper clipping posted on the Bakersfield School Alumni Facebook page. A 1901 Ozark County Times item (below) shares a Bakersfield report that Wiles had left for Memphis to attend medical school. The caption accompanying the newspaper photo, obviously published some years later, said Dr. Wiles was “one of four physicians who practiced in the Bakersfield area in the early part of this century. They all would make area house calls day or night on horseback or in a horse-drawn buggy. Wiles, who died in 1961, was Mrs. Swain’s brother and the uncle of Dr. Jack Wiles of West Plains.”

Dora – Mrs. Tilda Bennett, wife of Jim Bennett, died at their home just south of Dora last Tuesday night. She was interred in the Sweeton cemetery Thursday at three o’clock. She is mourned by a husband and seven children.

Tom Freeman, who had the misfortune to be struck in the eye with a piece of a tooth from a circular saw, is now suffering terribly. His eyeball burst last Sunday. Mr. Freeman intends going to Kansas City this week and to have the eyeball taken out.

... The committee composed of Mesdames J. C. Harlin, Baxter Gaulding and Hugh Layton has received a pattern of the comfort bag for the soldier boys at Camp Funston from the boys’ captain at Camp Funston. He asked for 30 bags at this time, and they should be sent so as to reach the camp not later than Dec. 15th.

Ladies over the county desiring to assist in making the bags should call on or phone one of the ladies of the committee for particulars.

The William “Ma-Ha-Ba” medical show has been drawing large crowds every night at their free show here this week. If the tonic will cure all the ills that are claimed it will, doctors in this vicinity will have the opportunity for taking that long planned vacation.

Mose A. Satterfield, 42, son of Mr. and Mrs. J. W. Satterfield formerly of this county but now of Yale, Okla., and his son Doyle, 18, enlisted in the Navy at Boise, Idaho, recently. The two men will be stationed at the Farragut Naval Training Station in North Idaho. The son said, “I just couldn’t stand to see dad leave, and I was so happy when he and mother gave their consent for me to enlist too.”

Ozark County started off the first day of the deer season in fourth place in the state with 206 deer killed. Texas county led with 312, Howell was second with 292 and Benton was third in 284.

The tree lights will be turned on at 6 p.m. with the parade to begin immediately thereafter.

At least four bands will join the parade, which will include Mr. and Miss Merry Christmas, Hootin an Hollarin royalty, the Shriners clowns and a variety of other floats and entries.

The climax of the parade will be the arrival of Santa Claus, who will be in the gazebo following the parade to hear the wish lists of his greatest fans.