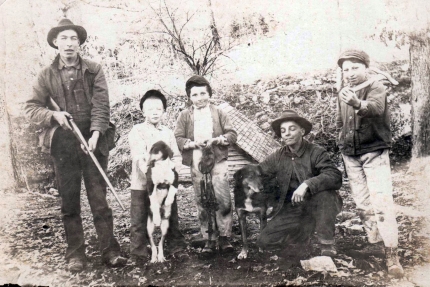 During the fall and winter hunting seasons, this undated photo of Ozark County hunters from long ago seems appropriate. The photo, from the collection of former Ozark County resident Donetta Newton Clouse, now living in Springfield, depicts a hunting party of men and boys ready to set out with gun, dogs, traps and an ax. Former Ozark Countian Randy Ebrite identified the man at right (with his eyes closed) as his grandpa, the late Buck Morrison. Ebrite said the boy next to him carrying the ax is a Newton, and the man at left is believed to be Morrison’s cousin. The other two boys are unknown. If you can provide more information about the hunters’ identities, please contact Sue Ann Jones (sueann@ozarkcountytimes.com or 417-679-4641).

The Normal [school] had a very successful opening last Monday. The building was thronged with happy students at an early hour. At 9 o’clock, the ringing of the bell called them to order and after dedicating the building by singing and prayer, appropriate remarks were made by Rev. E. J. Dunaway and Prof. Wilbur. ... Before the students separated for their respective rooms, they gave three rousing cheers for the new building and for the noble-hearted men and women who have so faithfully and generously aided in rebuilding the house.

Otis Gilliland left a few days ago for Macon, Missouri, where he has accepted a position in an abstract office.

Dora – Mrs. Tilda Bennett, wife of Jim Bennett, died at their home south of Dora last Tuesday night and was interred in the Sweeton cemetery Thursday at three o’clock. Mrs. Bennett is mourned by a husband and seven children, also a number of relatives.

A few days have been granted A. D. Harrison to remit the money for the United War Work Campaign. ...

One of the latest remittances received was from J. B. Herd, Locust, for District No. 66, which practically doubled their quota. This makes their district the largest percentage of over subscriptions of any in the county.

Brixey – Warner Byerley has returned from the training camp.

Elijah – Mrs. Dick Long passed away Nov. 12. She leaves a husband, one son, a mother and four brothers to mourn.

Pontiac – Babe Willbanks was buried here Thursday. He had gone to Arizona to regain his health but had waited too late.

J. T. and M. M. Sanders and Will Rhodes took cotton to Flippin this week.

Toledo – Jess Turner and family are about all sick with influenza.

We regret to hear the sad news of Hansom Mahan, son of Houston Mahan, being killed in the last big battle of the war. We extend our sympathy to the bereaved ones.

Aviation student Sheldon Lee Dauchy, 19, son of Mr. and Mrs. Schuyler Dauchy of Gainesville, has arrived at Nashville where he will take examinations to determine which branch of service he is best fitted. This is the first stop in a training program that will eventually graduate Aviation Student Dauchy as a commissioned officer with wings in the Army Air Forces.

He is a graduate of Gainesville High School where he was captain of the basketball team. He has even cousins in the Air Corps.

Last Wednesday evening, the former Tom Martin home at Isabella, occupied by Mr. and Mrs. Jim Pettit and their infant daughter, Heather Rennee, was destroyed by a fire which began in the attic.

Mrs. Pettit, the former Verone Janian, and her daughter were visiting her parents, Mr. and Mrs. Armand Janian, at the time of the fire, but Mr. Pettit was at home. The only things saved were the baby’s bed and two baby record books.

Gloria Wray, a senior at the School of the Ozarks at Point Lookout, was one of 40 chosen to represent campus organizations during the recent homecoming queen pageant. Miss Wray represented the Business Undergraduate Society.

The daughter of Mr. and Mrs. Elmer Wray of Theodosia, ... she has been at the School of the Ozarks since the fall of 1975.

About 4 p.m. last Thursday, Gainesville Fire Chief Joe McMahon responded to a fire at the county jail on the top floor of the Ozark County Courthouse.

... Ozark County Sheriff Max Vaughan said there were three prisoners in the jail at the time. ... Two of the prisoners were sleeping and a third was awake. ... Vaughan said he suspects the fire was started by the prisoner who was awake but he will investigate the matter further.

There no injuries as a result of the fire, and there was no property damage . ...