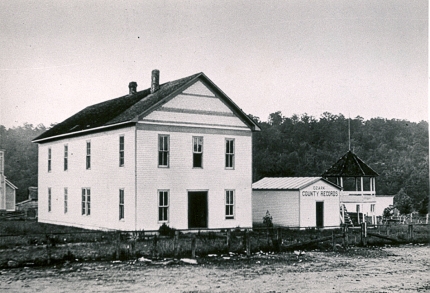 This photo shows the Ozark County Courthouse that burned in 1934, as reported in the Times Past item below. The building, completed in 1874, was said to have been “built of wood from the county’s pineries.” After the courthouse was destroyed by fire on Nov. 28, 1934, the county court purchased the Christian Church building – a small portion of which can be seen on the left edge of the photo. The congregation was moving out of the building, which was located on the east side of the square near the present site of Park Place Realty. After that former church building also burned in 1947, county offices operated out of several rental quarters on the square until the current building was completed in 1939, costing $43,000 – paid for by a county bond issue and a 55 percent matching grant from the Federal Works Project Administration.

On account of there being so many post office names so nearly like Benners in the state, and the mail so often is miss sent, the name of Benners, 4 miles northwest of Thorn-field, has been changed to Toledo.

Dimock – Taylor Luna, who has been teaching the New Hope school, is going to leave this week for Okla. where his parents reside.

Theodosia – Tom Mahan and daughters Lillie and Daisy went to Ava last week. The girls went to have some dental work done.

Bill Gladden and wife took a load of cotton to Lutie Thursday.

Raymond Ledbetter has been selling corn to Willie Wallace.

Cal Hogan and Olin Edmonds took a load of cottonseed to Cotter last week. Cal has sold about $600 worth of cotton and Lin has sold $108 worth this year.

Melvis Seivert is the owner of a new Ford truck.

Horace Gaulding and wife, Olin Edmonds and Mabel Landers all went to Springfield Saturday. Horace went to see a specialist about his hearing which has been bothering him.

The fearful call of “Fire!” sounded through our little city about 1:30 Wednesday morning when fire was discovered issuing from the southwest and northeast corners of the courthouse. By the time citizens arrived on the scene, the fire had gained such headway nothing could be removed from any part of the building.

Joe Blacksher of Lilly Ridge, while at work clearing on the Norfork dam basin on Friday, chopped himself on one of his legs so severely he had to be taken to the hospital for treatment.

Mrs.Isabella McSpadden, wife of Tom M. McSpadden, and mother of Mrs. M. J. Hoerman of this city, passed away at her home in Gainesville Nov. 26. … Funeral services were conducted at Salem, Mo., on Nov. 29....

Pontiac – Pvt. Everett Chism was home on a furlough with his wife, parents and other relatives.

The new Rose Variety Store located in the new modern Rose building on High Street is now open and ready for business.

This is the first exclusive variety store in Ozark County. It is owned and operated by Mr. and Mrs. John Rose, former operators of the Garden Rest Auto Court.

The Lister Drug Store, to be operated by Roy Lister Jr., will open Dec. 5th. The drug store is to be located in the Orvis Wood building at the southwest corner of the square.  … Mrs. Lister and small son Terry plan to accompany him as soon as a vacant house or apartment can be located.

The Hootin an Hollarin log cabin on the courthouse lawn was destroyed by a fire set by arsonists sometime early Sunday morning.

The cabin, a symbol of Ozark County’s annual folk festival, has been on the corner of the courthouse lawn since 1961, the first year the festival was held.

Roy Smith brought it to Gainesville from Hurricane Hollow near Sycamore where it had once been a smokehouse on a pioneer homestead.

A Caulfield woman was found dead at the scene of a residential fire Sunday night.

According to state fire marshal Mike Johnson, the body of Beatrice Parker, 62, of Caulfield, was found just inside the back door of her home by Caulfield Fire Department Chief Jack Sloan.

... The cause of the fire is undetermined at this time because of the destruction, but Johnson said, “We are not looking at it as a suspicious fire at this point.”