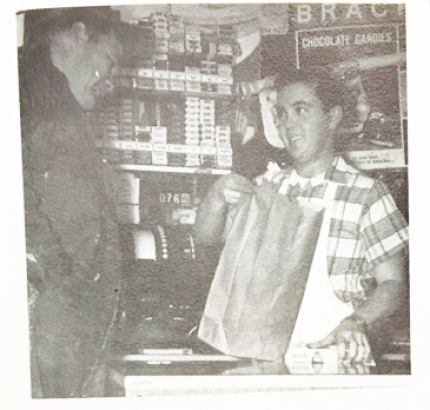 The late David Ford assists an unknown customer at Ford’s Market in this photo that appeared with the grocery store’s ad in the 1968 Gainesville High School yearbook, the Bulldogger. The market opened in 1906; its closing was announced in a 1980 news item shared in this week’s Times Past (below).

Joe Champieux, the new blacksmith, has installed a telephone in his place of business for the benefit of his patrons.

Rockbridge – The new schoolhouse at Souder will soon be completed.

J. R. Brown of Rock-bridge, after attending the camp meeting at Mt. Zion, in Douglas County, week before last, started to Carter County to visit a sister. His mangled body was later found under a railroad trestle near Freemont, Mo. A coroner’s inquest was held, and the verdict was that he had been knocked from the trestle by a train. ... In his pockets was found $1,175 in cash and duplicates of deposits in the Rockbridge bank.

He was a brother-in-law of ex-representative Wm. Mahan of Rockbridge and had been a member of the Masonic lodge at Rockbridge.

Mr. Charles Price and wife of Sharp, accompanied by their two daughters and two sons, were here attending the fair. Mr. and Mrs. Price and sons were entertained at the J. C. Harlin home while the daughters were guests of Everett Luna and family. Mr. Price is manager of the zinc mines near Sharp.

Ocie – Fred Hampton is now a soldier and is waiting for a call to go to the training camp.

Uncle Samuel Guinn, an old Union soldier, died at his home about 3 miles east of Ocie last Monday and was buried in the Lutie Cemetery.

Tex, a licensed pilot from Texas, arrived here with his plane Monday afternoon. He found a good landing place on the E. K. Sanders place on the north edge of town, and at once opened up a lively business taking up passengers. ... He carried his passengers over a wide circle over the town, taking two passengers at a time. ... He will be here Saturday and Sunday and for $1.50 you can gratify your desire for a ride in the air.

Pvt. Mearl Holmes, who is in a California camp, and wife, are here visiting relatives and friends.

New Harmony – H. W. Farmer, wife and baby, have gone to Virginia. Junior is one of Uncle Sam’s boys and has been in the navy for almost 3 years. He was here on furlough visiting his parents and other home folks.

Isabella – Ed Smith has his tobacco harvested. He had a good crop.

We sure have a good slab across the Haskins ford on a good road from Isabella to Hammond.

Ford’s Village Market will be closing its doors sometime in mid-October, and a sales discount campaign is underway to clear the shelves by that time.

The market, operated in recent years by Glenda Ford and her son and his wife, David and Pat Ford, was established in 1906 by J. N. Ford in partnership with Harry Force. ...

In the early days of the store’s history, the Ford-Force partnership was dissolved, and Ford became the sole owner. Since then, with the exception of 1939- 1950, the business has been run by some member of the Ford family.

Dawt – Everything seems to be back to normal as we see Irene Corp go by twice during weekdays as she takes the neighborhood children in the Gainesville School bus that she has been driving for 38 years.

On Friday night, Sept. 25, several persons gathered here at the nice home of Farris and Erma Dean Evans to honor Violet Morrison on her retirement as postmaster of the Tecumseh post office where she has worked for the past 18 years.

Bakersfield – Worked our last tomatoes into pickles and have the sweet potatoes dug. We have had two light frosts.