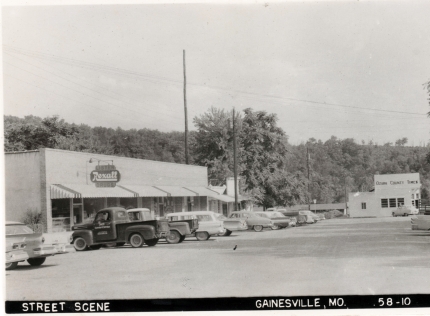 Considering all the Hootin an Hollarin activities that occurred on the Gainesville square his past week, we thought this 1958 picture postcard showing the east side of the square would be an interesting contrast. The postcard is from the collection of the Ozark County Historium, which welcomes contributions of old photos of Ozark County families and places. Bring the photos to the Historium during business hours, 10 a.m. to 2 p.m. weekdays or contact Janet Taber at janettaber@gmail.com, 265-3372, for more information.

Twelve soldiers and three trainmen were killed and 37 soldiers and two engine men were injured at 7:30 o’clock on Tuesday night of last week when a freight train and troop train crashed together in a head-on collision one mile east of Marshfield. The wreck occurred at a very sharp bend in the track. Both trains were going at a slow rate of speed.

Thirty-four Ozark Conty boys are being notified by the local board to be ready to entrain for military training at Camp Pike on or between Oct. 7-11. This number will take all of Ozark County’s men in Class 1 now examined and ready for training.

Hammond – Mr. Grudier is moving his sawmill to Barren Fork where he will begin sawing walnut lumber for the government.

Our school was dismissed this week on account of wheat sowing.

Jack Dooley, our hustling phone manager and operator, and Miss Dorothy Carpenter, phone operator at West Plains, were married on Sept. 9. Mrs. Dooley will continue in the West Plains office a few weeks yet.

Cpl. Hughie Wallace is spending a furlough from Roswell Army Air Field at Roswell, N.M., with relatives in the west part of the county. He was in town Tuesday accompanied by his sister, Mrs. Ray Hillhouse.

Mrs. Geo. Crawford, Mrs. Albert Blacksher and Mrs. Roy Green of Lilly Ridge left on the bus Tuesday. Mrs. Crawford and Mrs. Green are going to California to visit relatives, and Mrs. Blacksher is going to Utah to visit her daughter, Mrs. Earlene Hicks and family.

Almartha – Julianna Mahan is boarding at O. D. Souder’s. She has been employed to finish Lawrence Plaster’s term of school Lawrence has volunteered for the Navy.

Ralph Prock has been here for the past 30 days on furlough from the Navy. He has returned for duty.

Mr. and Mrs. Gordon Bennett, both lifetime residents of Ozark County, will celebrate their 50th wedding anniversary with a basket dinner at noon and afternoon open house at their home near Souder next Sunday....

The couple was married Spet. 30, 1911, in their buggy on the road between her home and the Evening Shade log schoolhouse where she was teaching at the time. Judge George Collins of Brixey officiated. He was a judge and schoolteacher.

Miss Wood, the daughter of Mr. and Mrs. William Wood, is a freshman at the SMS Residence Center in West Plains.

In less than a day, the J. O. Wood house was moved from the lot recently purchased by the Bank of Gainesville to a new site on a hill across from Mearl’s Tire Shop.

The move was made by J. N. Waugh and sons of Batesville, Ark., with only one minor mishap when a skid sank into an old cistern as it was moved from the foundation.

Damage estimates are still coming in on Friday and Saturday’s flooding in Ozark County, but officials are guessing that damage amounts could very well be in the tens-of-thousands range as the entire county, especially the northern section, received as much as 10 inches of rain in a 48-hour period from early Friday morning until early on Sunday.

The areas in and around Dora, Wasola, Thornfield, Rockbridge and Tecumseh, among others, were all hit the hardest in the flooding....

Even near-freezing temperatures during the evenings couldn’t dampen the Hootin an Hollarin spirit, and the 60–70 degree weather was welcomed by festival goers during the daytime. ...