Bakersfield seniors celebrate the end of one chapter, the beginning of the next 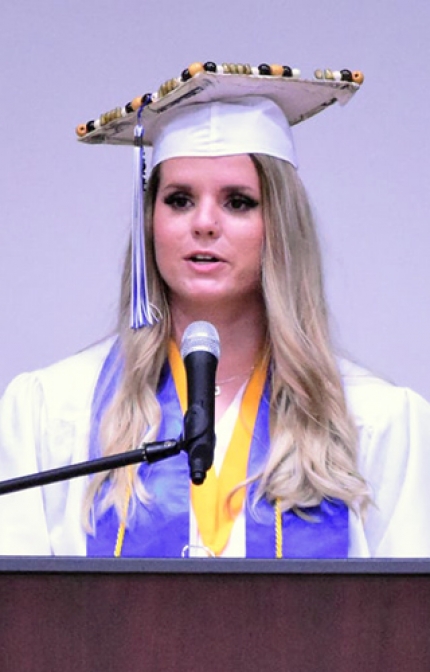 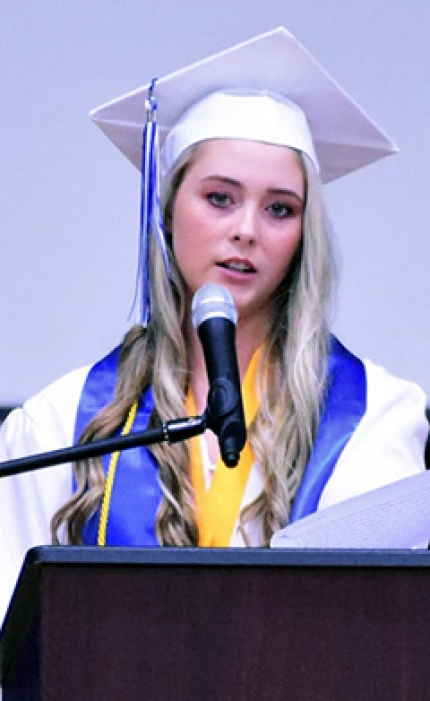 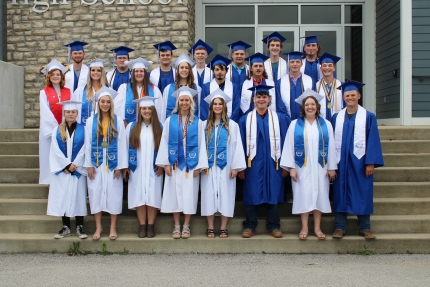 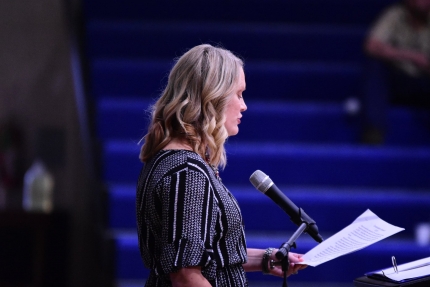 Bakersfield’s 2021 commencement exercises were held Friday, May 21, at the school.

“I know they can achieve these goals. I know this because I witnessed their drive and determination at a young age,” she said.

Smith told the audience a story from when the senior classmen were first graders in her class. She said an evaluator had told her there was no way students could be learning in her class when she described the setup, which had a unique situation where students in two different reading levels were simultaneously with Smith leading one group and three classroom aides leading the other. Smith explained to her students that someone would be watching them and they should carry on as usual as if no one was watching them.

She said that the evaluator entered and watched the classroom conduct of the students, and then left the room, to Smith’s relief. He returned with two other women. At lunch, the man told Smith that the sight was one of the most amazing things he’d seen. She said it was then that she knew the students would be successful.

She said she’s seen the students who weren’t in that first grade class also show drive and determination. Then she addressed the seniors individually.

“Joseph and Silas, I see it in the way you lead and care for your track family. Jaden, I saw it the day you won first place in the 100- meter dash. Ashton, the day you stepped up and ran a relay even though you had already participated in four events. Jacob and Reece in your work ethic whether you are working for money or volunteering. Grace Miller in the blogs you write helping young girls understand life. Sierra and Haley Kimmel in your leadership skills during basketball. Logan Scott and Levi Tryon for always being there to lend a helping hand. Both of you are more than willing to try new things to be successful. Sarah, Seth and Gage for always finding a way to make tough situations more carefree and enjoyable for everyone around you. Brady and Logan Collins, I’ve seen the way you take care of and love your family. Sydney, your determination to succeed at everything you do. Hailee Collins, how hard you worked to get past your injuries and you conquered them. Riley, your adventurous spirit that has already taken you many places. Levi Woodward and Kalob, your example of lifelong friendship. Tate, your ability to make the best of any situation. Katelynn and Gracie Lashley, you’ll both be amazing nurses with your sweet and giving spirit shining through to your patients.”

She finished her speech by reading the students part of the Dr. Suess book “Oh the Places You’ll Go.”

“Each one of you has the potential to be successful at whatever you choose to do, but to be truly successful you must know how to pick yourself up whenever things don’t go as planned,” she said.

This year’s salutatorian was Sydney Tucker, daughter of Holly and Ivan Tucker.

Tucker plans to attend Missouri State University-West Plains this fall and hopes to enroll in the RN program there for the spring 2022 semester.

After becoming a registered nurse, she plans to continue her education to obtain a Bachelor of Science in nursing and enjoy a career as a traveling nurse.

She began her speech by telling her classmates that she was humbled to be able to address the class as salutatorian this year.

“Since I’m up here giving a speech, I just want to mention that this will probably be the last time we will all be matching and sitting in the same room for a long time,” she said, jokingly.

Tucker said she was reminded of a special quote from author Earnest Hemingway, who said, “It is good to have an end to a journey, but it is the journey that matters in the end.”

The quote “is meaningful to me because all of the relationships we make with other people and the experiences we share, matter,” she told her classmates. “During the journey, the impressions we leave on other people – good or bad – are very important.”

Tucker said she and her classmates could be walking beside their future boss while shopping in a store, or maybe a person they helped in someway could return the favor one day when they are in need.

“My dad always told me that it’s important to stay humble and kind. I think that, as individuals, we should think beyond ourselves and see situations from others’ point of view. The saying, ‘You can’t understand somebody until you walk a mile in their shoes,’ is very important,” she said. “We never know what someone is going through. The best thing to do is just give everybody a smile because you could be the reason they have a good day.”

Tucker explained that it had been an honor and privilege to get to know and learn alongside her classmates for the 13 years she spent at Bakersfield High School.

“I’m going to miss all of the memories and funny moments, like when we were all in the eighth grade, and we put Sierra’s fart box in Mrs. Scott’s desk and when she sat down, Sierra pushed the button,” she said, laughing.

“And remember the time we were doing a skit in front of the whole school and Tate and Logan put on dresses and made it look like they kissed each other?” she said.

Tucker gave special thanks to the school board and to superintendent Dr. Amy Britt “for always going above and beyond for any of her students and for making time out of her busy schedule to help our class in the final stretch. She also thanked principal Doyne Byrd “for keeping us safe” and counselor Trudy Summers “for helping me with my dual-credit classes.”

She thanked her teachers and her bus driver “for getting me to school safely since day one of kindergarten.”

She thanked former longtime Bakersfield ag teacher Troy Wiesner, “who taught me many lifelong skills and . . .  always pushed me to do my best.”

She finished by thanking her family.

“My dad has always been there for me and showed me good work ethic. He’s the one that would talk with me for hours if he saw that I was struggling. My mom has shown me that anything is possible. She has never let her disability get her down,” Tucker said. “I want to thank my sisters for always putting up with me and being there for me.”

She closed the speech by telling her classmates, “Take pride in how far you’ve come, and have faith in how far you can go. Anything is possible.”

This year’s valedictorian is Hailee Collins, daughter of Jennifer Collins and Justin Collins. She also plans on attending Missouri State University-West Plains in the fall semester. She hopes to earn a Bachelor of Science degree in animal science and become a veterinarian technician.

Collins began her speech with a bit of humor. “We finally made it,” she said. “But I have just one question for all of you: How?”

She said that, in all honesty, their graduation day was made possible by the support of others who taught them and guided them and “made sure we were up at the crack of dawn to get [to school].”

She asked her fellow classmates to take a minute to give a round of applause to all those who had supported the students through their high school journey.

She then took a trip down Memory Lane, reminding this year’s graduates of a funny incident they’d shared four years ago.

“One of the first memories I have here at Bakersfield High School was the first week of freshman year. Sitting in American history, everything was going fine. We were filling out our study guides, watching the slide show go by. Page after page after page of slide show…,” Collins said. “Then, suddenly, Mrs. Ehrhart completely missed her chair and fell on the floor! We were all speechless, absolutely terrified that she’d hurt herself. After a minute or two, she got up calmly, looked at all of us, and said, ‘You know, you can laugh now.’ I think that was the breaking point. We were never quiet after that again.”

Collins thanked her classmates, explaining that she was hesitant to come to Bakersfield from a different school she’d attended for 10 years before moving there. She said she remembered her first day there, when she didn’t know anyone or where anything was.

“I didn’t know where I was going or who I needed to ask for help, and in that moment, I didn’t even know what I was doing there,” she said. “Now, four years later, I am not scared anymore. I can find my way through any situation that comes my way – you know, except for filing taxes.

“What we once were, scared freshmen, we are no more. What we once were, Bakersfield seniors, we can now be called someone’s future doctor, nurse, boilermaker, lineman, veterinarian or even an engineer,” she said.

“There are endless possibilities for us now. The whole world lies open in front of us. We just have to pick the right path to lead us to where we want to be,” she said.

Collins reminded her classmates of the good times they’d shared as a class, preparing for homecoming, playing games and creating skits.

“Speaking of homecoming, one of the best times was sophomore year. Things were going smoothly, everyone was having a blast and just an overall amazing time. That was, until the condiments got pulled out. I am sure some of us will never order mustard on our sandwiches again!” she said.

She said she is proud of herself and her classmates for making it to their high school graduation, ready to take on their next chapter.

“As our time draws to an end, just remember that we made it together – not only with the support from our teachers and families, but with each other. We told each other we could, and we really did. We were there for each other every single step of the way.  As a class, we went through everything together, all of it. Not just the good times, but the bad times too.,” she said. “Our book is closing on this chapter, but there is a new chapter out there for each and every one of us. We were there for each other for our first steps down these halls, but now we are taking our last as the Bakersfield graduating class of 2021.”