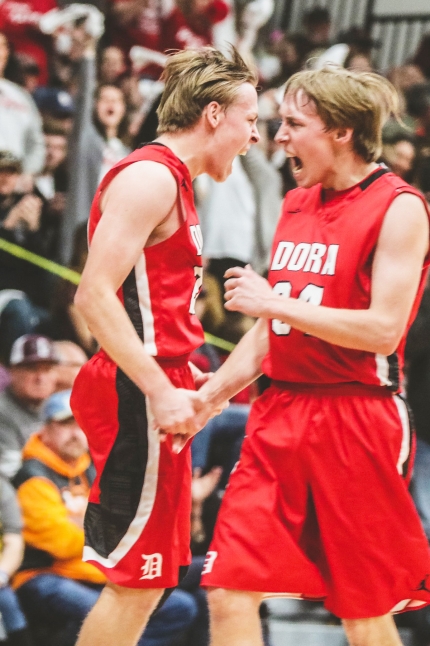 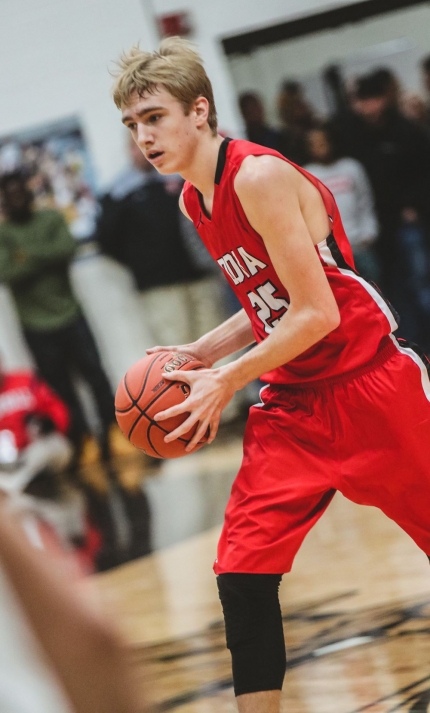 Photo by Karla Smith Dora’s Waylon Masters looks to pass during Saturday’s quarterfinals game against Risco at Van Buren. Masters, one of the five sophomore starters for the Falcons, scored 14 points during the game. 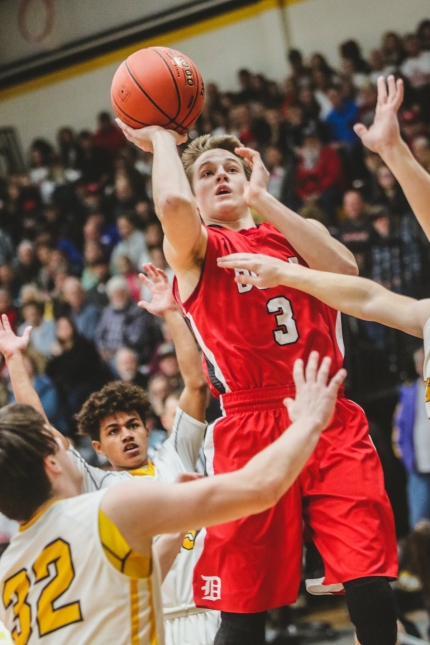 Photo by Karla Smith Dora’s Isaac Haney goes up for 2 points against Risco defenders during Saturday’s quarterfinals game at Van Buren. Haney scored 28 points and hit the 1,500 mark for his high school career so far. 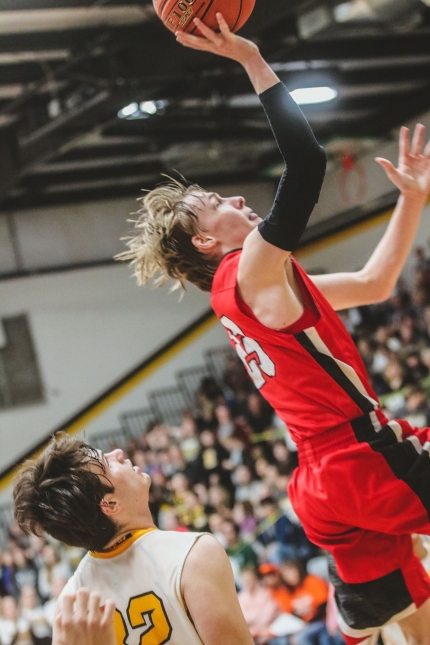 The Dora Falcons defeated the Risco Tigers 74-37 in quarterfinals action at Van Buren Saturday, punching their ticket for the basketball program’s first-ever trip to the state final four.

The long line of basketball fans waiting to watch the contest between the Falcons and the Tigers snaked past buses and parked cars for almost an hour before game time at Van Buren High School, and Dora fans who got in weren’t disappointed.

Ranked number one in the latest state poll, the Falcons outscored Risco in every quarter. “Dora is obviously a great team,” Risco coach Brandon Blankenship told sports editor Dustin Ward of the Daily Dunklin Democrat. “You cannot afford to dig yourself in a hole against a team like Dora. We tried to weather the storm early, but when they come out hot like that, there is not a whole lot you can do honestly.”

The Falcons did come out hot, taking immediate control of the game. “We came out the first half and played as good of a first half as we’ve played all year,” said Dora coach Rick Luna.

Isaac Haney hit a couple of early three-point shots, and from there, the Falcon defense took over on their way to a 47-20 halftime lead. “The boys did a great job of sticking to our game plan defensively,” Luna said. “All of our guys, from our starting five, to the guys on the bench, came out with a lot of intensity. That in itself is hard for teams to prepare for.”  There was  no let up in the second half by the young Dora team, whose starting lineup is all sophomores. Haney led the scoring with 28 points and hit the 1,500 mark for his high school career. Bryson Luna scored 16 points, followed by Waylon Masters 14, Mason Luna 9, Auston Luna 8 , Colby Hoover 2 and Kyle Hambelton 1.

“This is a big win for our program,” Luna said. “This win puts us in the final four for the first time in the history of basketball program. The guys are excited but know we still have a lot of work to reach our ultimate goal.”

The state championship game is set for 6 p.m. Saturday, March 9, at JQH Arena. “We can’t thank our fans enough for traveling to these games and supporting us,” Luna said. “We’ve been packing the gym, and our guys feed off their energy. We hope to see a lot of people Friday and Saturday in Springfield.”