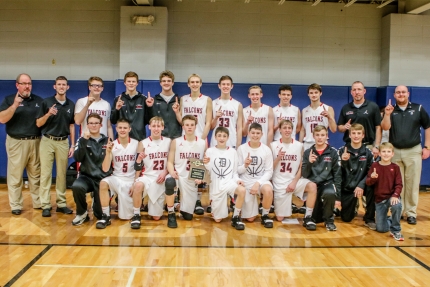 The win marks back-to-back district titles for the young Dora team, whose starting lineup is made up of sophomores who hold a new school record for number of wins in a season with their overall record of 27-1.

Eminence, which defeated Dora in last year’s sectionals and went on to win the 2018 Class 1 state championship, jumped out to an early 20-15 lead at the end of the first quarter. “They did a great job spreading us out in our zone,” Luna said. “We started the second quarter in a man defense and tried to put more pressure on them.”

The Falcons and Redwings were tied up at the beginning of the fourth quarter, but Mason Luna drained a 3-pointer from the corner, and from there, the Falcons never looked back. Eminence made another run late in the game, but Auston Luna took a charge under the basket to get the ball back for the Falcons. “Bryson Luna went 4 of 4 at the free throw line in the fourth quarter, and Kyle Hambelton had 6 huge points off the bench,” Luna said.

The Falcons took on Chadwick (18-11) to battle for the sectional title at 6 p.m. Tuesday, Feb. 26, at Mountain Grove. Results of the game were unavailable at press time. The winner of that game will play the winner of the Risco vs. South Iron game at 1 p.m. Saturday in Van Buren.