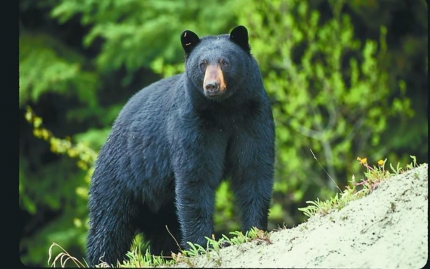 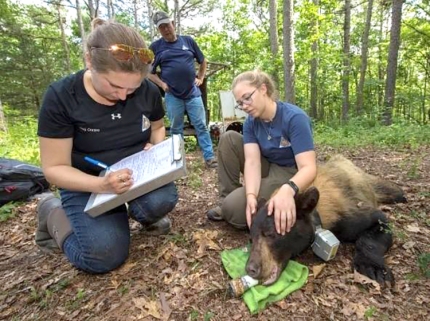 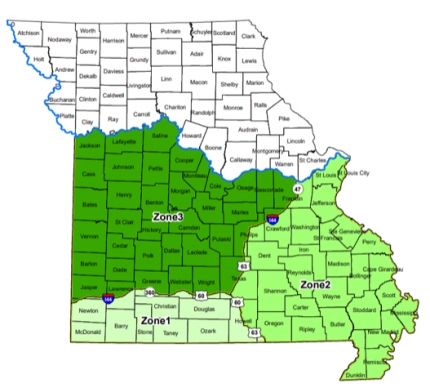 With most of the state’s black bears found south of the Missouri River and primarily south of Interstate 44, MDC has established three Bear Management Zones (BMZ) in southern Missouri. Permit and harvest quotas are established for each BMZ. Ozark County is within BMZ 1, where 200 permits will be issued for the harvest of 20 bears.

The Missouri Department of Conservation has announced that it will hold the state’s first black-bear hunting season Oct. 18 to 27.

The Missouri Conservation Commission gave final approval of MDC’s season framework, permit and harvest quotas at its March 26 open meeting. The hunt will be limited to southern Missouri, as the state’s estimated 600 to 1,000 black bears are found south of the Missouri River, and primarily south of Interstate 44, MDC said in a news release. This year’s hunt will allow 40 black bears to be killed.

“Being able to add this iconic species to the long list of hunting opportunities for Missourians is a testament to the decades of bear research and management by MDC staff,” said MDC Director Sara Parker Pauley. “A limited annual hunting season will help manage the growing number of black bears in the state.”

Ozark County, along with adjoining Taney and Douglas counties and half of Howell County, is designated as BMZ 1, where 200 permits will be issued with a harvest quota of 20 bears.

The northeastern half of Howell County, along with several other counties east of Ozark County, are designated as BMZ 2, where 150 permits will be issued with a harvest quota of 15 bears.

BMZ 3, which includes several counties north of Interstate 44, will have 50 permits and a harvest quota of five bears.

Permits may be used on public or private property within the BMZ.

The annual season will begin each year on the third Monday in October and run for 10 days or until BMZ-specific quotas are reached. Once the specific harvest quotas are filled for each BMZ, the season for that BMZ will be closed.

Missouri residents will be able to apply during May for the hunt with permit selection by July 1 through a random drawing of applicants.

Hunting hours will be a half-hour before sunrise to a half-hour after sunset. Hunters will be allowed to use both archery and firearms equipment with allowable methods being the same as those for deer and elk, except for the use of an atlatl.

Baiting and the use of dogs will not be allowed.

The harvest limit will be one bear per permit. Only lone black bears may be taken. Hunters may not take bears that are known to be in the presence of others bears, including female black bears with cubs.

Bears may not be disturbed, pushed, harassed or taken from a den.

Bear hunters must wear hunter orange, make reasonable efforts to retrieve shot bears, and they may not leave or abandon commonly edible portions.

MDC will also require the submission of a tooth from each harvested bear within 10 days of harvest; the tooth will help MDC staff with black bear research and management.

Hunters who are issued permits must call MDC each day before they intend to hunt to determine if the BMZ-specific quota has been reached. If harvest quotas are not reached, the season will close at the end of the 10 designated hunting days.

The limited and “highly regulated” black-bear hunting season follows several years of public comment, including informational open houses in 2019 and a public-input process in the spring and fall of 2020, the news release says.

An online bear-hunting permit-application period will run from May 1 to 31. Applicants will be required to pay a $10 application fee to be considered.

Individuals must be Missouri residents and will be allowed to apply to hunt in one of the three designated BMZs.

Hunters can apply online at mdc.mo.gov/buypermits, through MDC's free MO Hunting app, through a permit vendor, or by calling 1-800-392-4115.

There will be no “sit-out” period for those selected to receive permits.

Selected hunters must be 11 years old or older and must have completed hunter education (or be exempt) by the time of the hunt to purchase a permit.

MDC is not issuing landowner-specific black bear hunting permits; however, a minimum of 10 percent of zone-specific resident black bear permits will be allocated to qualifying landowners. Zone-specific permits can be used anywhere in the specified zone on public or private property with landowner permission. To qualify, landowners must have at least 20 contiguous acres within the BMZ for which they are applying.

The black bear is one of the largest and heaviest wild mammals in Missouri with some reaching up to 500 pounds. Black bears were historically abundant throughout the forested areas of Missouri prior to European settlement but were nearly eliminated by unregulated killing in the late 1800s, as well as from habitat loss when Ozark forests were logged. However, a small number of Missouri black bears survived, and reintroduction efforts in Arkansas helped to increase bear numbers in southern Missouri.

Over the last 50 years, bear range in Missouir has grown and bear numbers are increasing each year by approximately 9 percent and are expected to double in less than 10 years, says MDC.

“A bear-hunting season in our state will provide opportunities for Missourians to participate in the sustainable harvest of this valuable wildlife species,” said MDC bear biologist Laura Conlee.

“As our black bear population continues to grow, a highly regulated hunting season will be an essential part of population management into the future. The timing and length of the season, allowed hunting methods, and a limited permit allocation coupled with a limited harvest quota will ensure a sustainable harvest of our growing bear population.”

MDC’s 2020-2030 Black Bear Management Plan will guide bear management in Missouri for the next decade. Learn more at mdc.mo.gov/bears.