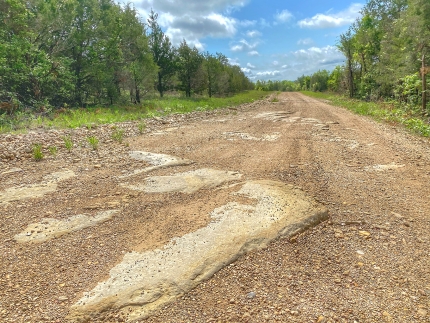 At their Monday morning meeting, the Ozark County Commissioners discussed the ever-changing water situation at Haskins Ford, the new signs ordered for the recycling center and an upcoming courthouse holiday before turning the meeting over to citizens’ comments, where three local residents asked for improvements to the county road where they live.

The meeting opened with an update on Haskins Ford, the mile-long bottom area along County Road 863 that crosses the upper reaches of Bull Shoals Lake.

“I noticed that the Haskins Ford is backed up again,” said Presiding Commissioner John Turner.

“Yeah, barricaded on both ends,” Western District Commissioner Layne Nance said. “Can’t go around them unless you drive off in the mud and get stuck. I figure if we did it that way, and someone drives around them, it’s on them and not us.”

Nance said if the lake continues to back up and eventually covers the current barricades on either end of the ford, additional barricades will be added farther up the roads. The barricades placed out in the roadway or along the shoulders, announcing the dangerous water crossing, are in addition to permanent signs installed alongside the county road.

When the water is at dangerous levels, the permanent signs can be flipped down to display a message saying the road is closed. When the road is open, the signs are flipped up so that no message is visible.

The signs will show the recycling center’s updated hours of Monday through Thursday, 6:30 a.m. to 4:30 p.m.

Collins said he was able to pay for the signs through a grant through the South Central Solid Waste District, which often contributes grants to help pay the recycling center employees’ wages.

“That way it don’t cost the county nothing,” Collins said.

The signs were ordered to let residents know the hours and warn them not to leave bags of trash and recyclables outside the chain link fence when the recycling center is closed.

A Google listing for the Ozark County Recycling Center has also been updated to show the center’s new hours, a change that the commissioners  hope will curb confusion.

The recycling center accepts #1 and #2 plastics, cardboard, tin cans and plastic milk jugs, as well as appliances, including washers, driers, refrigerators and microwaves.

Household trash is accepted for $2 per bag.

For more information, call the recycling center at 417-679-3444 during regular business hours.

Turner said the Ozark County Courthouse will be closed Friday, May 2, in honor of President Harry Truman’s birthday. The county generally follows the Missouri state holiday schedule, which includes Truman’s birthday as a paid day off.

The county’s road and bridge crews, and the recycling center employees, who normally work four, 10-hour days Monday through Thursday, will have Thursday off as a holiday instead.

The recycling center will be closed Thursday (as well as its usual Friday).

Upset about the road

The commissioners’ business was handled quickly this week, and the meeting then turned to citizens’ comments.

Darrin Becker, John Spears and Doris Sheridan introduced themselves and explained that they were neighbors who lived in separate homes along County Road 514, which connects to County Road 527 in the Mammoth area at Possum Walk Creek, and runs to Highway 5 south.

“I read in the paper last week the comments about your road maintenance and how it’s come through the years. I’d say it’s a fairly nice comment, but when it comes to my road, it just ain’t very accurate,” Becker said.

His road lies within the eastern district of the county, which Collins presides over.

Becker said he’d spoken with Collins about 11 months prior about the horrible condition of that county road, and he’d only seen a road grader on his stretch of roadway once since that discussion.

Becker said they’d moved to the property three years ago, and in 2018 a load of gravel was spread on the county road. Collins said that was probably rock that was purchased as part of the relief efforts after the historic flood of 2017.

Becker said he believes the road has only been graded once since the gravel was applied 18 months ago. Now, 11 months after it was graded, it’s in very bad condition, he says.

The three residents said the road has gotten so bad that those who don’t have high clearance vehicles have a hard time getting in or out. Sheridan told the commissioners she drives a car and struggles to get in or out sometimes.

“I will say when they do go down the road, whoever is driving the [graders] are very friendly, and if you need out or something, they’ll make a way for you to get out. They’re very good at that and very nice,” Sheridan said.

“That’s why I couldn’t believe what you told me,” Collins said, referring to his earlier comment that it was unbelievable that the grader operator hadn’t been down the road in 11 months.

Becker said Collins’ comment and a similar one made by Turner offended him, as he believed the commissioners were saying they didn’t believe what he was saying.

“That operator is very dependable,” Collins said. “He believes in doing his roads how they should be.”

“And he does… everywhere but my road,” Becker said. “I’ve drove on his other roads. They’re all great, but ours… just isn’t.”

Becker guessed that each grader could cover 10 to 15 miles of county road in a day, but Nance said the crews cover much less than that if they’re doing it right.

“If you pull the ditches and do it right, three miles is about all you can do. Now, you can hit and miss and do 20, and you still didn’t do nothing,” Nance said. “But three miles, that’s a hard day if you do it right.”

“All I can tell you is that I’ll look into it personally,” Collins told Becker, Spears and Sheridan, promising that he would drive the road himself to see the condition and speak with the grader operator.

“Please, sir. I’d deeply appreciate you coming out there and taking a gander at what we have,” Becker said.

‘If one of them pops back up online,  it’s sold by the next day’

The three residents said the road maintenance is even more needed now that many new residents are living on that county road; these new residents have purchased small plots of land as part of two “off-grid subdivisions,” as Becker described them.

The plots of land, some accessible from County Road 514 and others from Highway 5 south, are being sold by two separate companies, Homestead Crossing Inc. and Instant Acres.

Both sellers offer owner financing with very low down payments to those who purchase the land.

Spears said he and his wife had purchased a lot from Instant Acres, which has developed “The Tracts at Cave Hollow,” where 98 plots of land, ranging from 4 to 16 acres, have been divvied up among a range of people who’ve moved here from different places across the country.

The plots sell as quickly as they’re put up for sale, Spears said.

“If one of them pops back up online, it’s sold by the next day. I keep looking to buy the ones adjacent to me, so I’m always on the website looking. As soon as they’re put up, they’re sold,” Spears said, explaining that he was originally from Kansas City and had moved to Colorado a few years ago. When he and his wife began looking for a piece of property closer to home where they could develop an off-grid home, he’d come across the Instant Acres website.

“I must’ve gotten on there a day or two after they’d been listed originally because there were only a few left. I chose one, bought it and we moved about a month later,” he said.

Spears said they’ve moved a portable shed to their property now, and they’re looking to build but have postponed that plan until lumber is cheaper.

“There are a couple neighbors out there who plan to build too, but I think they’ll run into the same issues as me. Everything has gotten so expensive. It’s hard to afford [building] now,” he said.

The Instant Acres website, instantacres.com, says, “Cave Hollow is one of our homesteader-friendly rural developments. This simply means that the standard property covenant requiring a minimum 600 square foot concrete foundation for a residence does not apply….”

The website advertises the properties as being close to Bull Shoals and Norfork Lakes and Mountain Home, Arkansas, but without any of the “zoning regulations” that are required in many areas. It boasts the rural location, good hunting opportunities and lack of restrictions and regulations.

The company encourages those who are interested in tiny homes, shipping container homes or off-the-grid residences to consider their options.

A 5-acre tract of land was listed on the website for $32,500, equaling about $6,500 per acre, a pretty hefty price compared with other land costs in Ozark County. The lot that was advertised, as well as all of the others, have sold.

The website says that buyers have the option to put down as little as $500 and make monthly payments of $375 for 15 years with an annual interest rate of 9.75 percent. Other buying options are available for those who have more money to put up front.

For more information or to see videos of the subdivisions, visit www.instantacres.com/parcel/cavehollowwestexpanded.