True words of thanks to my sixth-grade teacher 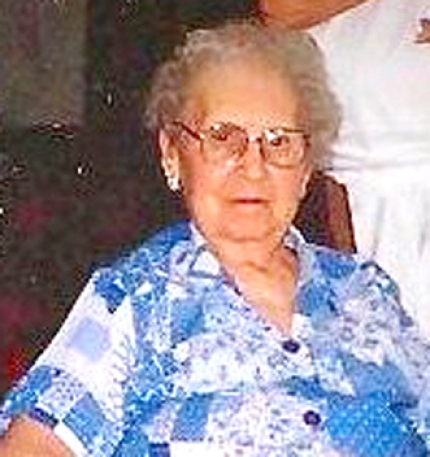 Gainesville’s PTO is raising money to install new playground equipment at the elementary school. (See related story, page 3.) It’s badly needed. The current play-piece, 20-plus years old, is a wooden boat-shaped thing bristling with splinters and infested with bugs and wasps in warm weather. The PTO is appealing to individuals and families to donate in honor of teachers – past and present – who are making, or have made, a difference in someone’s life.

When the fundraiser started, I donated in memory of my parents, Mearle and Stella Luna, lifelong educators. Now, as the PTO asks again for help, I’m remembering another Gainesville teacher who touched my life in an enduring way.

Thana Breeding Mahan was born in 1910, so by the time I landed in her sixth grade class in Gainesville in the early 1960s, she was more than 50 years old and had a wealth of teaching experience that began more than 30 years earlier in one-room schools around the county.

Besides being my teacher, Miss Thana was also my cousin. Her mother and my grandmother – the grandmother I mentioned here in a February story – were sisters. We were related, and she knew my family. And like many of my relatives, she called me Ann.

Miss Thana was a great teacher but, to be honest, I only remember two things about that year. The first incident happened one day when the high school boys PE class made a terrible racket outside our classroom windows, scaring the wits out of all of us sixth-graders.

Miss Thana marched out there and gave those boys a long and loud tongue-lashing I’ll bet they still remember. I don’t know where the boys’ sorry PE teacher was during this episode, but I do remember the high school PE classes being a lot quieter after that. Miss Thana was a strict, though kind teacher with a wonderful, sparkly laugh, but she could strike fear into your heart like a lightning bolt on the rare occasions when she got mad.

Which brings us to the second event that year that stands out in my memory – and gave me a gift I’ve never forgotten.

For an American history assignment, Miss Thana directed us all to write the story of Daniel Boone’s life, presenting the pertinent facts and then reading our essay aloud to the class. All the good students wrote that Daniel Boone was an American pioneer hero who was born in 1734 in Pennsylvania, that he married Rebecca Bryan and had 10 children, that he led a group through the Cumberland Gap to open up what was then the West and that he was a brave Indian fighter, hunter and explorer who died in Missouri in 1820.

When it was my turn, I smugly stood and read my masterpiece – a complete work of fiction that, as I recall, included a profound tale of violence in which old Dan’l was captured by the Indians, burned at the stake until almost dead and then thrown into the river with a boulder tied to his foot. In my version, he was rescued by a beautiful Indian princess who begged the chief to spare what was left of Daniel’s life. And then he moved to Missouri and lived happily ever after. The End.

Something along those lines …

When I finished reading the dramatic tale, I stood there smiling confidently at my classmates, proud to have held their rapt attention. But they stared back at me in stunned silence, bracing themselves for the scolding Miss Thana was sure to unleash upon me for completely disregarding her instructions to write the facts and making up a harebrained tale of lies and complete nonsense.

Miss Thana’s mother had told her about my grandmother, a young schoolteacher who had died at age 17 of childbirth complications. And now Miss Thana was telling me about her: Your grandmother wrote poetry.

Of course, those words meant nothing to my classmates, who were sure I’d be staying in at recess to rewrite the essay. But to me, they hinted that, like my grandmother, I might be a writer someday too. Miss Thana was saying it was in me to write and I couldn’t help it, even when my words got me in trouble.

Twelve years later, in 1975, I graduated from Mizzou with a master’s degree in journalism. That night, I thought of Miss Thana and wrote her a little note, telling her about the dumb essay I wrote in her sixth grade class and how her simple words that day had inspired me to choose a career in writing. (And promising to carefully stick to the facts in my future writing assignments.)

She wrote back promptly, commending me on my degree and assuring me she remembered my essay. “It was about Daniel Boone, wasn’t it?” she wrote.

Today my check to the PTO’s playground fund went into the mail, with Miss Thana’s name written on the memo line. Many other wonderful people guided me to this career in journalism that I’ve loved for more than 40 years. But my sixth grade teacher lit the spark.