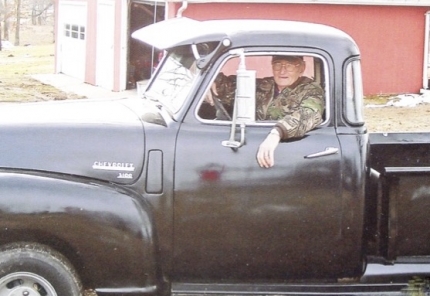 Ava resident John Stephens isn’t physically able to celebrate his upcoming 90th birthday with a party, but he enjoys getting greeting cards. Friends and relatives who wish to send greetings may address them to him at Route 3, Box 34, Ava, MO 65608.
He was born April 9, 1928, in Ozark County south of the Douglas County communities of Drury and Gentryville. At least he always thought he was born on April 9. But when his daughter sent off for his birth certificate recently, “it came back that he was born on the seventh,” said Jo, his wife of nearly 64 years. “You know, things were different back then. He was probably delivered by a granny-woman,” she said, using the traditional Ozarkian term for midwife.
His parents were Roy and Ada Rackley Stephens, but his mother died six months after he was born, and he went to live with his grandparents, Ol and Lide Driskell. His first cousins – Ida Mae Rackley Huse, and her brothers Delbert Rackley and the late Don Rackley –are well-known names to long-time Gainesville-area residents.
Sometime later, John’s father remarried “and he has eight half-brothers and sisters,” Jo said.
John continued to live with his grandparents and attended the one-room school at Bell (it was also called Brush Creek, Jo said). “He didn’t go to high school,” Jo said. “He had to quit after eighth grade and help his grandparents. They had a big farm and a sawmill.”
He was drafted into the Army during the Korean War but stayed stateside. After his discharge in 1952, he came back home and promptly fell in love with Thelma Jo Pool. “We lived within spittin’ distance of each other,” she said, laughing, when asked how they met. They were married June 19, 1954.
John worked in logging for awhile and eventually went to work for Heath & Son Feed Supply. He stayed 35 years and retired from there, said Jo, who’s now 83.
They have two children, Max Stephens and his wife Kathy, who live in Rogersville, and Lisa Hensley, who lives in Hartville. They also have four grandchildren.
Until his health declined, John was a sportsman who enjoyed fishing and deer hunting. He also enjoyed attending Hootin an Hollarin each year, and he loved driving the 1950 Chevy pickup he’d bought from a neighbor. He fixed it up and repainted it, Jo said, but when health challenges arose, “he got to where he couldn’t drive it,” she said.
He parked it out in the yard with a For Sale sign on it, and someone came along and bought it. “And now the truck’s in California,” Jo said.