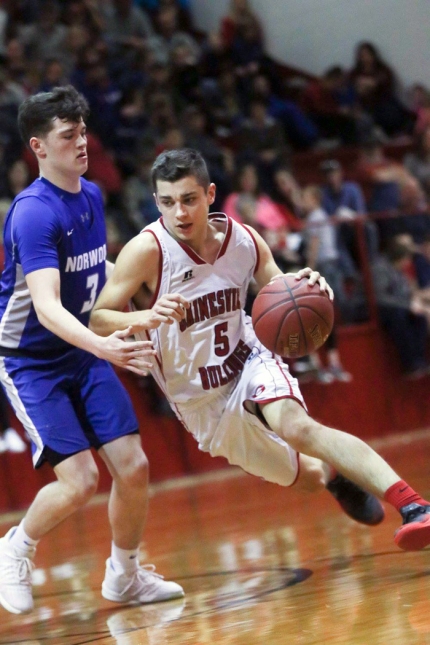 The Gainesville Bulldogs hosted Sparta and Norwood last week and added two wins to their record in front of packed crowds of spirited fans.

“We had a great week,” said GHS head coach Matt Powell. “We played very well and found a way to win against Seymour at the end.  Norwood was a fun game and an overall fun night with it being senior night and homecoming.”

Tuesday, Jan. 30, the Seymour Tigers visited Gainesville and were beaten 33-32. Garrett Morgan and Brandon Poe led the scoring for the Bulldogs with 11 and 10 points, respectively. Other players scoring for Gainesville were Jaxon Britt 6, Wyatt Wilson 4 and Brodie Chapman 2. Wilson led in rebounds with 9 and had 2 blocks.

With a week of homecoming festivities behind them, the team was ready for Norwood Friday night and defeated the Pirates 68-56, led by seniors Brodie Chapman, Brandon Poe, Wyatt Wilson and Justin Wallace.

“I can’t say enough good things about these seniors. I’m proud of the way they finished their career at home. We look forward to the next couple of weeks and districts,” said Powell.

The Bulldogs traveled to Fordland Tuesday. Results of that game were unavailable at press time. The team heads to Mansfield Friday and to Hartville Tuesday.